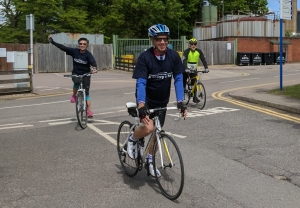 Staff and friends from W Sherry & Sons have raised £3000 for Michael Sobell House in Northwood by taking part in the recent 40-mile charity bike ride organised by the hospice.

The Sherry team did this in memory of their colleague Corrado Boscarelli who sadly passed away in March. He was wonderfully cared for by everyone at the Hospice and Ophelia Chambers-Henry, Events & Community Fundraising Manager at Michael Sobell Hospice said: “We are so thrilled with the fantastic amount which was raised by the team at W Sherry & Sons. The hospice which is celebrating its 40th anniversary this year, relies heavily on charitable donations by local individuals and companies to keep up the high standard of support and care for its patients and their families in the most difficult time of their lives. We are very grateful to Neil Sherry and his staff for their support.”

back to top
Go To Top